Hardware wallets are considered the safest way to store bitcoin and other cryptocurrencies. it specialized devices that canSign transactions without disclosing a private key. They are less prone to phishing and malware than software wallets, and are less vulnerable to hacking than online wallets.

The hardware wallet market is now dominatedthe two main brands are Ledger and Trezor, which are unparalleled. Very few companies have such strengths that will surpass these two giants, although attempts are still being made.

Here are five well-known manufacturers of hardware devices for storing cryptocurrencies that have attracted attention this year. YubiKey is not a crypto wallet as such,This is a two-factor authentication (2FA) device with the ability to manage passwords. Despite the fact that YubiKey does not store cryptocurrencies, it adds an additional step to log into online accounts, and is often associated with cryptocurrency exchanges. YubiKey devices support Coinbase, Bitfinex, BitMEX, Kraken and some other platforms.

Of course, 2FA is already a common occurrence, butoften this function is based on SMS, and they can be intercepted. In contrast, YubiKey complies with FIDO U2F standards, and as a specialized device it is difficult to crack from a practical point of view. However, 2FA applications, such as Google Authenticator, are also quite secure, so a specialized 2FA device might be redundant.

YubiKey exists since 2007, but exchanges untilRecently, they did not support it - BitMEX became one of the first platforms that added its support in 2015. Since then, much attention has been paid to YubiKey: after the hack in May 2019, Binance advertised this product to strengthen security measures, and in June added its support and distributed prizes. SafePal is a fairly new hardware wallet. Its main goal is to combine security and mobility with accessibility. Currently, SafePal S1 sells for only $ 40 with a discount of the original price of $ 60. It is much cheaper than the expensive Trezor and Ledger wallets, which are sold at prices ranging from $ 60 to $ 150.

SafePal is much simpler than Ledger and Trezor, sohow it works exclusively offline. It does not send data via Bluetooth, Wi-Fi, NFC or USB. In case of damage to the security system, it erases its data. These features prevent anyone from stealing your key ... albeit at the cost of convenience, since SafePal can only display your keys on screen as a QR code. 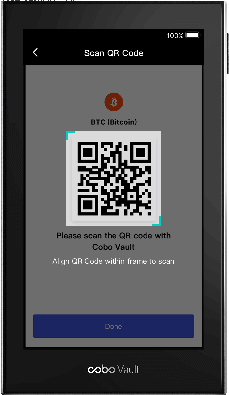 Cobo Vault - Another Secure Hardwarepurse. Like SafePal, Cobo does not transfer data via Wi-Fi, Bluetooth, NFC or USB and erases your data in the event of a security breach. In addition, Cobo Vault can be authenticated online, which prevents network attacks and ensures that your device is not fake.

Cobo Vault also offers a second line of defense: It is not only safe, but also durable, and stores your private crypto keys on military-grade equipment. The device comes with a metal tablet that stores words for recovering your wallet (or SEED phrase). This protects against loss, but not against theft.

In August of this year, Cobo participated in NEO Global Development from NEO and added support for Binance Coin around the same time. Ballet is a standalone hardware wallet that does not have electronic components, although there is a mobile application.

The device is an ordinary metal card: it hides your private key under a seal protected from unauthorized access and presents your public address in the form of a QR code.

This idea is not new: many manufacturers offer metal wallets, which are essentially the strongest versions of paper wallets. Of course, there are problems: you must believe that the manufacturer will not steal your keys. Ballet is trying to smooth out this moment due to isolated processes of production and key generation.

In addition to safe productionThe Ballet process is managed by a famous person. The company is headed by Bobby Lee, founder of BTCC, one of the first and oldest crypto exchanges in China. Ballet was presented at Coindesk Invest Asia just last week. Kastelo - open source hardware walletcode that is almost entirely developed by the Monero community. According to Michael Schlöch von Bennevitz, who heads the project, the device does not have a wireless transmitter. However, it allows data transfer via USB, and partners are developing various forms of autonomous data transfer.

Kastelo features are still subject to change, but onethe thing is guaranteed: it will be open and transparent. This means that anyone can verify the security of the device or even make their own device from scratch. It is not entirely unique, as Trezor and Ledger also have open source, but Kastelo will have fully open source.

Since Kastelo is an independent project,no big names are attached to it, and the development team has only about 40 people. However, the team collaborates with hardware wallet companies such as Shift Devices, Satoshi Labs and Ledger Paris, so this project should not be overlooked, despite its small distribution.

Hardware wallets may be differentSafe, you think: Recently, vulnerabilities have been discovered in Ledger and Trezor devices. However, these are minor errors that are difficult to use in practice. Previous incidents, such as the hacking of a BitFi wallet advertised by John McAfee, are also somewhat exaggerated.